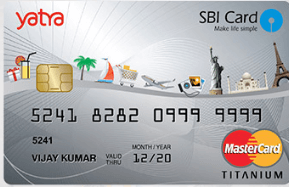 We have been doing reviews of SBI Cards for some time now and we assume that you found the reviews useful too.

Well, the card under review is a co branded card from SBI and Yatra. So, as the name suggest, this card is perfect for the ones who do lot of their bookings on Yatra. So, directly, this is one of the way to save more on Yatra which is apart from the savings on using the yatra coupons, yatra codes, yatra promo codes and yatra deals or yatra offers available on klippd.

You get two vouchers worth Rs. 500 each to be used on booking domestic flights on Yatra

Two vouchers worth Rs. 1,000 each on booking international flights

One voucher worth Rs. 750 to be used on hotel booking at Yatra

Rs. 1,500 worth domestic holiday voucher to be used on Yatra

Rs. 3,000 worth voucher to be used for International Holidays at Yatra

So, the total joining benefit of the SBI yatra card is worth Rs. 8,250.

Apart from these, yatra voucher you will also get 6 reward points for every Rs. 100 spent on Yatra. This will translate into 1.5% cashback every time you make a spend on Yatra. Again this cashback of 1.5% is sponsored by SBI and is over and above the coupons of Yatra and ecash of Yatra.

The 6 times reward points will also be applicable on spends at department stores, grocery stores.

Well, if you really see the card will be really awesome for all those travel enthusiast and users who book tickets regularly on yatra. In the last article, we had mentioned on how klippd can help you save cost on train tickets with Yatra. Well, if you get the SBI Yatra Card, the 1.5% additional cashback, will indeed be a boon. So actually all the travel agents and those who deal in the train ticketing business, should apply for the card.

Well, if you want some free e-cash worth Rs. 2,000, you can download the Yatra App from here.

But for all those, who do not make the transaction heavily on Yatra, should go for the SBI SimplyClick Card. We have done the review on the card in our earlier post.